Having spent the last few years developing web services mostly with Dropwizard I find it to be a great balance of just the right libraries I really do need to implement a decent web service without the opinions or magic of bigger frameworks.

Writing lots of services in Dropwizard often means you end up writing lots of web service clients for other applications to consume those services, and at Kainos we have developed what we call the ‘Courtesy Client’ pattern for reusing client code across other services to save time writing another identical set of HTTP client methods but without being coupled to the service implementation.

This post is illustrated by a sample-service Dropwizard 0.9.3 project which when run will give you a basic working RESTful web service demonstrating this pattern.

The sample-service is built using Gradle and consists of a three subproject structure with jars produced for API, service and client: 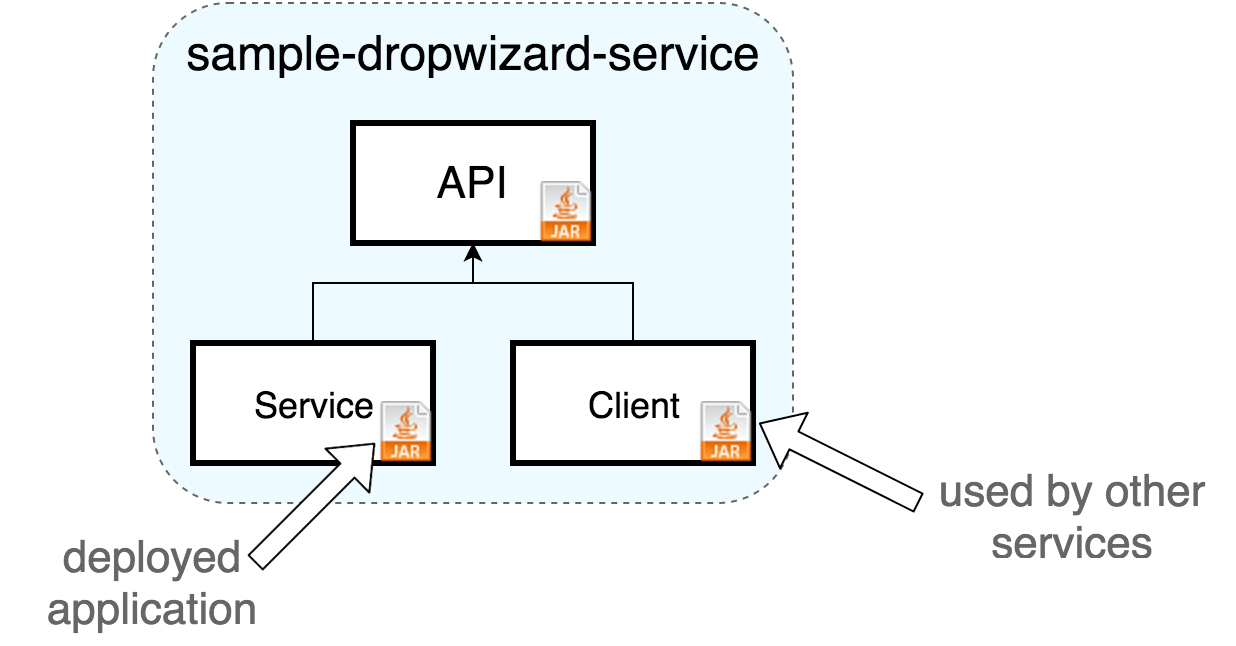 The API project used to define request & response objects for the HTTP interface. The classes are Jackson-annotated Data Transfer Objects without logic that will be serialised to/from your preferred format (most commonly JSON or XML). The API project produces a jar file used to share the request & response objects between the client and service, so that the client does not depend on the service.

The client project depends on API – it implements a HTTP client used to call the interface in the service and as creates request objects for use with service and accepts response objects defined by the API project.

The client project is used to integration test the service as a separate consumer, but is also published and versioned as an independent jar as ‘courtesy client’ for other Java services to reuse.

Other Java services can reuse client methods to avoid re-implementing same HTTP client calls, but are not obligated to use the courtesy client. A responsible service should write a client to use as part of its own interface testing so why not let other teams/projects benefit from the work already invested? Any downstream service wanting to take advantage of the reusable client library can resolve the jar from a shared repository such as a Nexus, and include this in their builds.

What if downstream consumers of the service don’t want to implement the courtesy client? Perhaps they want to use the Apache HTTP client or implement a caching client instead. No problem, just write your own client and meet the same HTTP interface. Services communicate via the HTTP interface so there is no need to use the courtesy client to talk to the service. It’s created out of courtesy!

The sample service linked can be used as a seed project for Dropwizard web services, and implements a couple of useful aspects.

The service project is a good citizen and hosts Swagger API documentation for other clients to inspect and use to test the service. The API classes are Swagger-annotated for types that Swagger can’t infer from the Jackson annotations (like how you want your dates serialised to JSON) and inside the Service project the resource classes defining the endpoint paths, headers and parameters are Swagger-annotated too. I’ve found this very useful both for testing the service and also to help produce good quality and up-to-date documentation.

The HTTP interface endpoints are annotated with Metrics so that each request is timed for stats collection.

The sample service also implements a basic healthcheck to facilitate monitoring as any responsible web service should do, which I’ve blogged about before.